Jimmy sat on the dusty floor of his factory in Guangdong looking for the money he was still owed. Its workers had been paid, machines sold and even office furniture removed after closing the factory doors in October for the last time.

“Lower orders and constant lockdowns were all reasons I wanted to close the plant,” he told the Financial Times. “But mostly, it felt like there was no hope. There was no sign of a rebound. »

Factory managers in southern China are reporting a drop in October orders of up to 50% due to full inventories in the United States and Europe, worsening the bleak outlook for the world’s second-largest economy.

October is normally a particularly busy time for the manufacturing sector and the sharp decline in activity has left blue-collar workers struggling to find jobs.

“Everyone is crying for the same thing. Orders drop 30-50% in some industries. A lot of people are closing their factories.

Alan Scanlan, a Hong Kong executive who works in sourcing from southern China, said the slowdown was the inevitable result of the end of the e-commerce boom after buyers overstocked for 2022.

Nike, for example, announced in September that its North American inventory was up 65% at the end of the third quarter, compared to a year earlier.

Last month, China’s manufacturing purchasing managers’ index fell to 49.2 from 50.1 in September, a bigger drop than expected, according to the National Bureau of Statistics.

On Monday, official data showed exports fell 0.3%; they were expected to rise 4.5 percent. Economists attributed the decline to a drop in orders as well as random lockdowns under China’s zero-Covid policy.

“We are in a scenario where Chinese domestic demand is affected by lockdowns, and externally we see this weaker demand from Europe and the United States, which is driven by high interest rates at globally,” said Gary Ng, an economist at Natixis in Hong. Kong. “It can be quite problematic when talking about southern China. . . these provinces are important for the Chinese economy.

A city official in Dongguan, a manufacturing hub in Guangdong, said local governments were struggling to maintain subsidies to help factories because they also had to pay for Covid testing.

“What are we supposed to do? Let the factories and the local economy die and waste all the citizens’ income on endless PCR testing?” asked the official, who wished to remain anonymous.

Gassner said some industries were hit harder than others, with electronics and renewable energy makers shielded from the carnage.

But the recession has further rippled through the labor market, according to factory managers who said it was easy to hire short-term workers.

“When orders dropped, we were forced to cut costs and one of the biggest expenses is paying workers,” said Danny Lau, honorary chairman of the Hong Kong Small and Medium Enterprises Association. , which runs an aluminum plant in Dongguan.

“We had over 200 workers at the beginning of last year, but only around 100 this year. . . This was mainly due to a lack of orders. 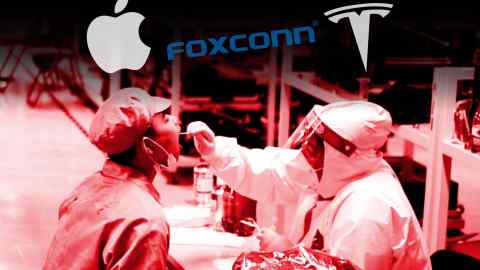 Chen, who only provided his last name, works for a Guangdong-based company that supplies global supermarkets. As his hours dried up, his income fell to 50,000 Rmb ($6,900) this year from 80,000 Rmb the year before.

“I used to buy bubble tea at full price without blinking an eye,” Chen, 24, said. “Now I only go to cafes that offer [discount] vouchers.”

He estimated his company’s orders had fallen 40% since April, compared to a year earlier.

“Customers are losing confidence. They don’t dare go all out in China anymore,” Chen said.

US-China tensions have also accelerated the shift out of China of manufacturing industry, which had already shifted to Southeast Asia due to rising wages on the mainland.

“There is no more chance of being in China. . .[since Americans]no longer desire products made in China, it is best that we clarify our operations in mainland China,” said Suki So, executive director of Hong Kong-based Everstar Merchandise, which plans to close its Guangdong factory.

The same goes for the rest of its factories in Southeast Asia, where it produces Christmas lights. “Demand for non-essential goods such as furniture has [dropped] as Americans get poorer. . . We had to rent warehouses [this year] to store finished products,” she said.