Democrats retained control of the U.S. Senate on Saturday, fending off Republican efforts to retake the chamber and making it harder for them to thwart President Joe Biden’s agenda. The fate of the House was still in doubt as the GOP struggled to muster a narrow majority there.

Sen. Catherine Cortez Masto’s victory in Nevada gave Democrats the 50 seats they needed to retain the Senate. His victory reflects the surprising strength of Democrats across the United States this election year. Seeking re-election in an economically struggling state that has some of the highest gas prices in the country, Cortez Masto was seen as the most vulnerable member of the Senate, adding to the frustration of Republicans who were convinced she could be defeated.

“We have done a lot and we will do a lot more for the American people,” Senate Majority Leader Chuck Schumer said Saturday night. “The American people have rejected – firmly rejected – the undemocratic, authoritarian, wicked and divisive direction that MAGA Republicans wanted to take for our country.

With the Nevada results now decided, Georgia is the only U.S. state where both sides are still competing for a Senate seat. Democratic incumbent Senator Raphael Warnock takes on GOP challenger Herschel Walker in a December 6 runoff. The Alaska Senate race moved to ranked voting, though the seat remains in Republican hands.

Democratic control of the Senate ensures a smoother process for Biden’s Cabinet nominations and judicial choices, including those for potential Supreme Court openings. The party will also retain control of committees and have the power to investigate or monitor the Biden administration, and may reject legislation sent by the House if the GOP wins that chamber.

In Phnom Penh, Cambodia, for the Association of Southeast Asian Nations summit, Biden said of the election results: “I feel good. I look forward to the next two years.

He said winning a 51st seat in Georgia’s runoff would be important and allow Democrats to strengthen their position on Senate committees. 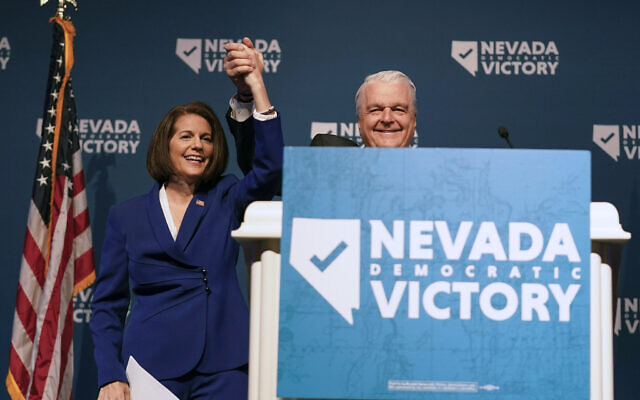 Biden, who called to congratulate Cortez Masto, said he still hoped Democrats could hold the House.

“It’s overkill,” he admitted. “Everything must fall in our path.”

If Democrats manage to win a House victory, it would mean full control of Congress for Democrats — and another chance to advance Biden’s priorities, which he says include codifying abortion rights. The party still lacks the 60 votes in the Senate needed to propose many types of major legislative changes.

The Senate fight had hinged on a handful of deeply contested seats. Both parties have spent tens of millions of dollars in Pennsylvania, Arizona, Nevada and Georgia, key battlegrounds where Democrats had hoped Republicans’ decision to nominate untested candidates – many of whom were backed by former US President Donald Trump – would help them defy national headwinds.

Tightly divided swing state, Nevada is one of the most racially diverse in the nation, a working-class state whose residents have been hit particularly hard by inflation and other economic turmoil. About three-quarters of Nevada voters said the country was heading in the wrong direction, and about half called the economy the most important problem facing the country, according to AP VoteCast, a survey of 2,100 state voters.

As the midterm elections approach, Republicans have focused relentlessly on the economy, a top concern for many voters amid stubborn inflation and high gas and food prices. The GOP also hit Democrats on crime, a message that at times exaggerated the threat but nonetheless tapped into anxiety, especially among suburban voters who turned away from the party in 2018 and 2020. And they put highlight illegal border crossings, accusing Biden and other Democrats of being unable to protect the country.

But Democrats were encouraged by voters unhappy with the U.S. Supreme Court’s June ruling striking down the constitutional right to abortion. They also portrayed Republicans as too extreme and a threat to democracy, following the January 6, 2021 uprising at the United States Capitol and Trump’s false claims – repeated by many GOP candidates – that the 2020 election was stolen from him. 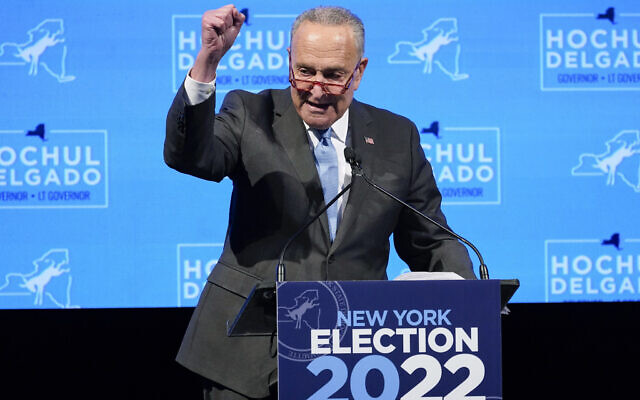 Schumer said the Democratic candidates’ pledges to stand up for abortion rights resonated with voters. He said the election results made him feel good about the country and its commitment to democracy.

“We knew that negativity, meanness, endorsing Donald Trump’s big lie — and saying the election was rigged when there’s no evidence of it — would hurt Republicans, not help them,” Schumer said. “But too many of them, and their candidates, have fallen into these traps.”

Nationally, VoteCast showed that 7 in 10 voters said the Supreme Court’s decision on Roe v. Wade was a big factor in their midterm decisions. It also showed that the reversal was largely unpopular. And about 6 in 10 said they support a law guaranteeing access to legal abortion nationwide.

Half of voters said inflation played a big role in their vote, while 44% said the future of democracy was their top concern.

Beyond Congress, Democrats have won key gubernatorial races in Wisconsin, Michigan and Pennsylvania — critical battlegrounds to Biden’s 2020 victory over Trump. Republicans, however, held governors’ mansions in Florida, Texas and Georgia – another battleground state that Biden narrowly won two years ago.

Although the midterms failed to deliver Republican romp, Trump remains a major factor in the national party and plans to announce his third presidential run on Tuesday at his Mar-a-Lago estate in Florida – setting up a potential rematch for the White House with Biden.

I joined The Times of Israel after many years covering US and Israeli politics for the Israeli media.

I believe that responsible coverage of Israeli politicians means presenting a 360-degree view of their words and deeds – not only conveying what is happening, but also what it means in the broader context of Israeli society and the region.

It’s hard to do because you can rarely take politicians at face value – you have to go the extra mile to present full context and try to overcome your own biases.

I’m proud of our work that tells the story of Israeli politics straight and complete. I believe that Israel is stronger and more democratic when professional journalists do this difficult job well.

Your support for our work by joining The Times of Israel community helps ensure that we can continue to do so.

You are a dedicated reader

We’re really glad you read X Articles from The Times of Israel over the past month.

That’s why we started The Times of Israel ten years ago – to provide discerning readers like you with must-read coverage of Israel and the Jewish world.

So now we have a request. Unlike other media, we don’t have a paywall in place. But since the journalism we do is expensive, we invite readers to whom The Times of Israel has become important to support our work by joining The Times of Israel community.

For just $6 a month, you can help support our quality journalism while benefiting from The Times of Israel WITHOUT ADVERTISINGas well as access Exclusive Content only available to members of the Times of Israel community.

Thanks,
David Horovitz, founding editor of The Times of Israel