In this photo illustration an image of Elon Musk is displayed on a computer screen and the twitter logo on a mobile phone in Ankara, Turkiye on October 06, 2022.

After several celebrity-verified and blue-check Twitter users changed their accounts to emulate the social network’s new owner, Elon Musk, he called for a quick change in policy enforcement.

Musk wrote on Sunday that, going forward, Twitter will now permanently suspend impersonators’ accounts without warning if they are not clearly labeled as parody.

In a series of tweets on Sunday, the CEO of Tesla, SpaceX and now Twitter seemed to change his mind about permanent bans and wrote:

Previously, we issued a warning before the suspension, but now that we are rolling out widespread verification, there will be no warning. This will be clearly identified as a requirement to register for Twitter Blue.

Any name change will result in the temporary loss of the verified tick.”

In May, after agreeing to buy Twitter, Musk opposed lifetime bans and said he would reverse one on Donald Trump. Twitter had banned the former president following the January 6, 2021 uprising on the US Capitol, over concerns that Trump’s tweets could incite further violence. Trump said he would not return to Twitter.

Before Musk completed his $44 billion acquisition of Twitter on October 28, the social network specified rules that users “may not impersonate individuals, groups, or organizations to mislead, confuse, or deceive others, or use a false identity in a way that disrupts others’ experience on Twitter “.

The company previously required that users engaged in parody “stand out in BOTH their account name and bio.”

Twitter previously said it would take one of three actions in response to copycats, including: “profile moderation”, “temporary suspension” or “permanent suspension”. The platform would not typically move to a permanent ban on a user’s account for impersonation before Musk’s takeover.

As of Sunday evening, Twitter had yet to update its terms of service to reflect Musk’s direction. 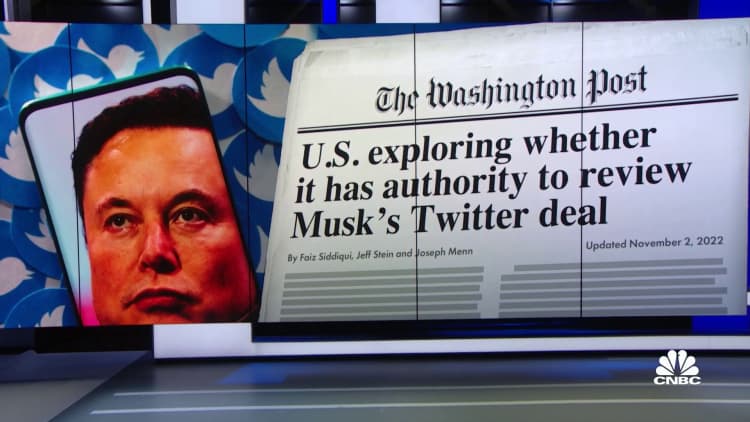 The decision by “Chief Twit”, as he jokingly called himself, has sparked controversy and consternation, in part because Musk presents himself as a free speech absolutist.

Last week, he gunned down activists, including civil rights leaders who called on advertisers to stop spending on Twitter until Musk proves the company can deliver on its promises of trust and security under his watch. direction.

When Musk showed up at Twitter headquarters in San Francisco on October 27, online trolls and zealots attacked the social network, polluting it with a flood of racist epithets and other hate speech. Researchers said Twitter took appropriate action in response, but should have anticipated and tried to prevent the raid.

After that gauntlet, Musk implemented deep downsizing at Twitter, laying off around 3,700 people across all departments, including layoffs from content moderation and other trust and safety experts. A major focus for him is overhauling the subscription product and platform verification system.

Verification, in the form of a blue check, was once reserved for public figures like politicians and celebrities who were highly susceptible to being impersonated by bad actors. Now Musk plans to make a verification mark available to anyone who pays $7.99 a month for Twitter Blue, a subscription product.

The verification changes have inspired an outpouring of mockery and impersonation from those who believe it will make it harder, rather than help, for Twitter users to find good information and authentic accounts on the platform. .

The account of one of the comedians who impersonated Musk over the weekend, Kathy Griffin, was suspended on Sunday. She changed her display name to Elon Musk and her profile picture to look like his, then wrote in a tweet: “After long heated discussions with the women in my life, I have decided that to vote blue for their choice was only fair (They are also hot women, by the way)”

Actor Rich Sommer, known for his role as Harry Crane in AMC’s ‘Mad Men’, has also had his account suspended after he changed his display name and profile picture to impersonate Musk.

Pretending to speak as Musk on Twitter, Sommer joked on Friday, “I’m in over my head. Can 44 billion of you tweet $1 each on Twitter to me?” Later, he added, more searingly, “Okay, time to use plan B since they’re keeping me on Twitter. Does anyone know any advertisers who are, like, some kind of ‘racism?’ “NO ACTUAL RACISTS!! just people who are, you know, curious about what (racism) it’s all about.”

Twitter and Elon Musk did not immediately respond to a request for comment or confirmation as to whether Sommer and Griffin were permanently banned.

Others impersonating Musk include actress Valerie Bertinelli, who changed her display name to Elon Musk on Saturday and then posted tweets urging her followers to vote for Democratic candidates.

“I Love You, America” ​​comedian, writer and host Sarah Silverman also changed her display name and avatar photo to look like Elon Musk’s. She then appeared to speak in Musk’s voice, writing in a youthful crack, “I’m a free speech absolutist and I eat doody for breakfast everyday.”

Bertinelli changed his profile before Twitter took apparent action against his account. She wrote on Sunday morning: “Okey-dokey I had a blast and I think I made my point. I’m just not a ‘trendy’ girl. Never been, never wanna be. Happy Sunday everyone! xo”

Silverman remained on the platform, only returning to using her own photo and display name after her account was locked out by Twitter. In a message to his 12 million listed fans and subscribers on Sunday, Silverman wrote, “1) 9 days ago, 2) yesterday 3) today. We’re having fun,” attaching three images.

One image referenced a promise Musk made to his followers on Oct. 28, writing that “comedy is now legal on Twitter,” just after buying the platform. The others showed his prank tweet, and that it triggered a restriction.

Musk has defended himself against critics who see his new enforcement directive as running counter to the free speech values ​​he upholds on Sunday. He wrote, “My commitment to free speech even extends to not banning the account following my plane, even if it’s a direct risk to personal safety.”

Student Jack Sweeney created a Twitter account using publicly available data that automatically updates to show where Musk’s frequent flights are on his private jet. Musk lobbied Sweeney and even offered to pay him to remove the flight tracker, but he stay on twitter even now.

On Sunday, after calling for a ban on copycats without a parody label, Musk also tried to distract from free speech. He wrote, “Twitter must become by far the most accurate source of information in the world. This is our mission.”