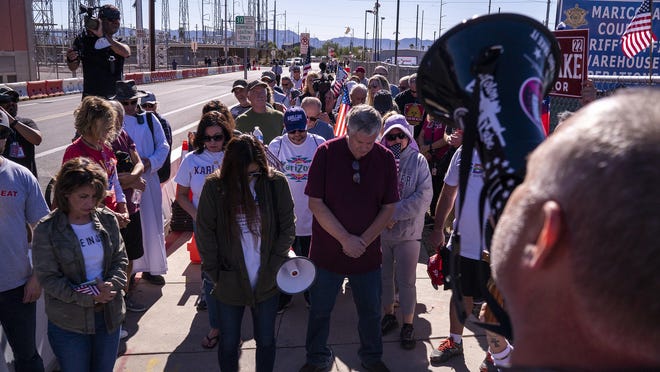 About 200 people gathered near the Maricopa County Tabulation and Election Center in Phoenix on Saturday to protest the vote tabulation process while holding signs decrying voter fraud.

Other signs called Katie Hobbs, the Democratic candidate for governor of Arizona, “corrupt,” and another sign read, “The FBI honors your oath, arrest all traitors.”

In a tweet Friday, State Sen. Wendy Rogers, R-Flagstaff, called on patriots to “stand together” and “pray for light to shine in the darkness and her truth to be revealed.”

Protesters surrounded the barricaded building of the electoral center seven times to re-enact the Battle of Jericho. As described in the biblical book of Joshua, the walls of Jericho fell after the Israelites marched around the city walls once a day for six days, and seven times on the seventh day.

“We are very worried, our country being turned upside down. The fact is, we have plenty of reasons to be concerned,” said State Rep. John Fillmore, R-Apache Junction, who was in attendance.

About an hour into the rally, Rogers posted another tweet, urging people to stay away from Maricopa County offices so they can finish counting the votes.

“The last thing anyone wants is a reason to stop counting,” Rogers said.

Andrea Alexander and her adult son, Michael Alexander, both county residents, stood on the sidewalk in support of the effort, both casting doubt on the legitimacy of the tabulations and what they said were voting irregularities on polling day.

However, Andrea Alexander was dismayed by the absence of organizers like Rogers, who on Friday had been promoting the event on social media.

“Shame on them,” she said, also referring to Republican nominee for Secretary of State Mark Finchem.

The mother said she was concerned about the people the event had attracted, including a man who walked past her and said: ‘9/11 was an inside job.

“I didn’t come here for a J6 rally,” Andrea Alexander said, referring to the January 6, 2021 insurrection attempt at the US Capitol.

Maricopa County Sheriff Paul Penzone expressed concern that some people were marching down the street and obstructing traffic. A protester collapsed from heat exhaustion and was treated by deputies. Otherwise, Penzone said the protest, which appeared to dissipate by mid-afternoon, was uneventful.

“They were peaceful,” he said. “They had a goal, they stayed within that perimeter and they left within a reasonable time.”

The crowd is the first to gather at the county’s electoral headquarters since counting began, except for a few people on Tuesday evening. Still, Penzone said he and his deputies would remain in the building as long as needed to ensure public safety.

He also praised Turning Point USA founder Charlie Kirk, who posted on Twitter that protesters in Arizona should not “show up in front of county buildings” or “tweet or say stupid things.”

“I don’t know Mr. Kirk; I don’t know his organization or anything about it,” Penzone said. “But I appreciate the fact that he understands, at least in this communication, that he can be of use to us and he has been.”

Simultaneously, Penzone warned politicians and political figures to be “reflective” of their rallying cries.

“If you are an elected official and you do things to induce a mob to show up here that can lead to violence or crimes, not only should we put you at the top of the criminal report and charge you, but I think we should send you the bill,” he said.

Josiah Hall, a 25-year-old Democrat, said he attended the rally to exercise his First Amendment rights.

“I’m here all day to make my voice heard because I believe in truth rather than conspiracy…and I’m saying democracy won,” Hall said. “People may have different beliefs, and this and that, but I think Arizona has spoken.”