Renault sees the internal combustion engine continue to play a crucial role in its business over the next few years, according to a senior executive at the French car giant.

On Tuesday it was announced that the Renault group and the Chinese firm Geely had signed a non-binding framework agreement to establish a company focused on the development, production and supply of “highly efficient hybrid and ICE powertrains [internal combustion engine] powertrains.”

According to Renault, it and Geely will own a 50% stake in the company, which will include 17 powertrain facilities and five research and development centers.

Speaking to CNBC’s Charlotte Reed on Tuesday, Renault chief financial officer Thierry Pieton sought to explain some of the reasoning behind the planned partnership with Geely.

“In our opinion, and according to all the studies we have, there is no scenario where ICE and hybrid engines represent less than 40% of the market by 2040,” he said. “So it’s actually…a market that’s going to continue to grow.”

The Geely tie-up comes as Renault fleshes out plans to create an EV spin-off called Ampere.

According to Renault, the French company Ampere “will develop, manufacture and sell fully electric passenger cars”. It is considering an IPO on Euronext Paris, which would take place in the second half of 2023 at the earliest, subject to market conditions.

During his interview with CNBC, Pieton talked about the need he feels for different types of vehicles. “It is very important to have, at the same time, the development of our electric vehicle business on one side – with Ampere – and to build a sustainable source of ICE and hybrid powertrains.”

This is why Renault is entering into a partnership with Geely, he added, explaining that the move represented “an absolute slam dunk” from a commercial and financial point of view.

Indeed, according to Pieton, he created “a world-leading supplier of ICE and hybrid powertrains with approximately 19,000 employees worldwide, spanning 130 countries.”

In comments emailed to CNBC, GlobalData analyst David Leggett noted that automakers can still make a profit from the sale of vehicles using internal combustion engines.

“Margins are generally higher than on electric vehicles, which are relatively expensive to manufacture,” he said.

“The gap will eventually narrow as EV volumes increase sharply and unit costs for key EV components drop significantly, but there is still plenty of profitable business to be done on ICEs and EVs. hybrids and it will go on for a while yet,” he added.

“Manufacturers need to be flexible in their powertrain offerings based on market needs, which differ across the world.”

Renault’s continued focus on the internal combustion engine comes at a time when some major economies are looking to move away from vehicles using fossil fuels.

The UK, for example, wants to stop the sale of new diesel and petrol cars and vans by 2030. It will, from 2035, require all new cars and vans to have zero tailpipe emissions.

The European Union, which the United Kingdom left on January 31, 2020, pursues similar objectives. In the United States, California prohibits the sale of new gasoline-powered vehicles from 2035. 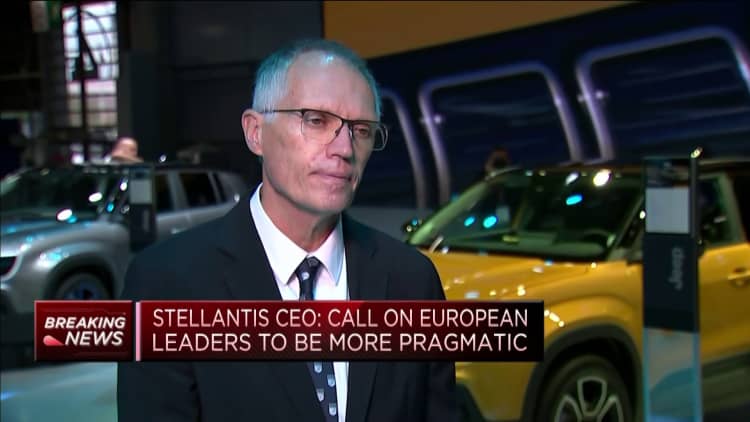 These goals have become a major talking point within the automotive industry.

During a recent interview with CNBC, the CEO of Stellantide was asked about EU plans to phase out the sale of new ICE cars and vans by 2035.

In response, Carlos Tavares said it was “clear that the decision to ban pure ICEs is a purely dogmatic decision”.

Expanding on his point, the Stellantis chief said he would recommend European political leaders “to be more pragmatic and less dogmatic”.

“I think there’s the opportunity – and the need – for a more pragmatic approach to managing the transition.”