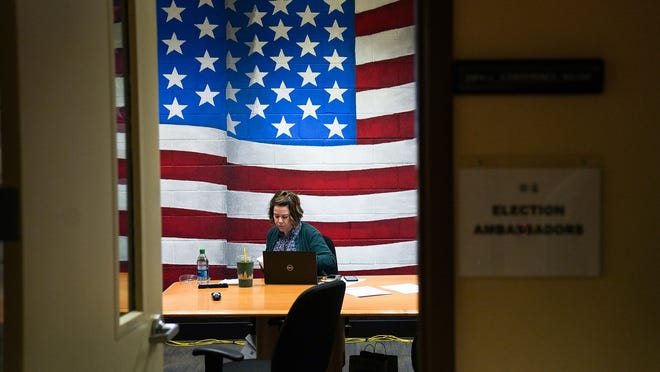 Election workers in Arizona’s two most populous counties planned to work through the weekend counting the remaining ballots from Tuesday’s election, with a possibly crucial update in the gubernatorial race expected Saturday night.

The state gubernatorial election was still too close to be called on Friday, with just 31,000 votes separating Democratic Secretary of State Katie Hobbs from her opponent Kari Lake, the Republican candidate and former TV news anchor.

Officials have already tallied more than 1.1 million votes, but another 370,000 have yet to count. Most of them come from counties that are home to Arizona’s population centers, including Tucson in Pima County and Phoenix in Maricopa County.

So far, ballot returns from both counties have favored Hobbs, who has held the lead since Tuesday, though Lake narrowed that gap significantly when Election Day votes were tallied.

But it’s not just rural versus urban geography that matters in the purple state election math equation.

Saturday night’s results update from Maricopa County is expected to include mostly ballots that were mailed to voters but dropped off on Election Day.

There is a lot of speculation about which candidate these ballots might favor.

In 2020, Republicans who typically voted early saw an increase in voters voting in person on Election Day, which helped Donald Trump close the gap to Joe Biden, who ultimately won the state. by approximately 10,500 voters. Lake won 70% of the votes on Election Day statewide this year.

Many political observers attribute the shift to voters showing up in person as a result of Trump’s efforts to cast doubt on the election before and after his ousting from the White House.

Going back in time two years earlier offers a different scenario, when Democratic candidates statewide fared better on Election Day. U.S. Senator Kyrsten Sinema, D-Arizona, and Hobbs, who was then a candidate for secretary of state, slowly climbed to victory as the day’s polls and late ballots were counted in 2018.

More than 290,000 ballots were cast Tuesday in Maricopa County, a record number from recent election years. These ballots must be removed from an affidavit envelope and staff members must verify voters’ signatures before they are counted, a process that can take days.

It is uncertain whether they will favor Lake, who fared better among Election Day voters, or Hobbs, who dominated early voting. Saturday’s tally in Maricopa County was expected to provide clues to those ballots, offering a possible indicator of the days ahead.

The election of a new governor in Arizona is one of the most publicized races in the country and one of the few to be called.

“As we wait for the outstanding ballots, I remain confident in the will of the voters (in Arizona) and am grateful to election officials for working diligently to ensure that every vote is properly counted,” said Hobbs said on social media Friday night. “To everyone following our race closely, thank you for your patience. We look forward to the days ahead.”

Lake made a rounds of national and conservative media appearances saying she was confident she would win, drawing a boost from Election Day votes. She pledged to reform the state’s “terrible” elections which are “badly run, they are full of fraud”. She did not respond to a request for comment or an interview this week from The Arizona Republic.

“We’ve seen this time and time again, and nothing is done,” Lake told Fox News’ Tucker Carlson on Friday. “Our elected officials tell us if we dare to talk about it, we’re conspiracy theorists, we’re deniers. Shit, we need to start talking about it.”

In Maricopa County, about 30 percent of polling places had problems on Election Day, with ballots printed on the spot not dark enough for tabulators to read. But Lake also alleged that the timing of the vote count and the length of the process were atypical, though Maricopa County officials dispute that claim.

Officials in Pima County, which still have about 70,000 ballots to count, planned to update their results every night around 6 p.m. Maricopa County officials typically update around 8 p.m.