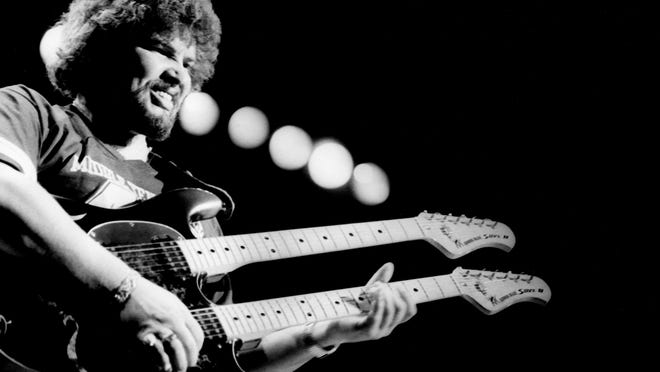 Jeff Cook, co-founding member of the Country Music Hall of Fame Alabama Trending Band, died Monday at the age of 73.

For a decade, Cook battled Parkinson’s disease, a progressive nervous system disorder that affects movement and causes tremors. He publicly revealed his diagnosis in 2017.

A rep for the band confirmed his death Tuesday afternoon to The Tennessean. Cook died at his beachside home in Destin, Florida.

As a guitarist, fiddler and singer in Alabama, Cook — alongside cousins ​​Randy Owen and Teddy Gentry — helped sketch out a blueprint for what a successful band can achieve in country music. He and the band completed this skit with a host of hits now considered country music staples by many: “Song of the South”, “Mountain Music”, “I’m In A Hurry”, “Cheap Seats” , and “My Home’s In Alabama”, among many others.

Hailing from the small town of Fort Payne, Alabama, Cook began pursuing his love of music over the airwaves as a disc jockey in his hometown. In 1969 he co-founded the band Young Country alongside Owen and Gentry, planting the seeds for what later grew in Alabama. In the mid-1970s, the cousins ​​performed as Wildcountry, cutting their teeth in nearby towns. — like Myrtle Beach, South Carolina, where the band embraced a balance of country songwriting and Southern rock sensibilities during long nights inside local club the Bowery.

The group adopted a new name in 1977: Alabama. Two years later—after a string of modest radio hits and the adoption of full-time drummer Mark Herndon—Cook, Owen and Gentry accepted an invitation to play the showcase for “New Faces” at the company’s annual seminar. country radio in Nashville.

What came next? This might as well be country music history.

The band signed a deal later that year with RCA, beginning a remarkable run up the country radio charts. Alabama landed eight No. 1 songs on the country charts between the spring of 1980 and the summer of 1982, according to the Country Music Hall of Fame. This series included pop crossover hits “Love In The First Degree” and “Feels So Right,” as well as “Tennessee River” and “Mountain Music” — staple songs from Alabama that the band continued to play for decades. .

And success didn’t stall after that rocket-launch start in the early ’80s. Between 1980 and 1993, at least one song from Alabama topped the country charts every year. The group won a host of awards during this time, including a three-year run at the CMA Entertainer of the Year from 1982 to 1984 and five ACM Award Entertainer of the Year trophies from 1981 to 1985.

In a city dominated by solo artists and vocal groups, Alabama proved that an instrumental group could carve a path to national success, matched by few artists at the time.

“Country music has always been about solo artists, and I think they’ve capitalized on what the [o]utlaws had started, which gathered a young audience for the genre,” country music historian Robert K. Oermann said in 2017. He added, “Jeff was the instrumental wizard who could do fiddle and guitar. .

“…while he wasn’t on center all the time, his contributions really made a difference when you listen to the hook,” Galante told the Tennessean in 2017. beyond our lives.”

For some, Cook’s onstage showmanship and backstage friendship helped shape a class of entertainers to follow. Country hitmaker Kenny Chesney – who shared the stages with Alabama early in his career – described Cook and the band as being “so generous with wisdom” during the singer’s formative years.

“[Alabama] showed a kid wearing a t-shirt that country music could be rock, could be real, could be someone who looked like me,” Chesney said Tuesday. gave the heart to pursue this dream.”

After an initial farewell tour that ended in 2004, Alabama reunited in 2011 for a charity concert to benefit victims of the tornado in the band’s namesake state. During his absence from Alabama, Cook released a handful of solo projects. He toured with his Allstar Goodtime Band and released collaborations with Charlie Daniels and “Star Trek” star William Shatner.

Cook entered the Country Music Hall of Fame in 2005 as a member of Alabama, joining country music’s most wanted club.

Alabama resumed touring in earnest with a 40th anniversary celebration in 2013. Four years later, Cook cut back on performances with the band due to the continued impact of his Parkinson’s diagnosis.

He stopped touring with Alabama around 2018. As of 2019, his bandmates told The Tennessean that they made sure his gear was set up before every show — just in case he wanted to hit the stage.

He co-wrote a song on a 2015 comeback album called “No Bad Days” which over time took on new meaning for the Hall of Fame musician.

“After I was diagnosed with Parkinson’s, people would quote the song to me and say, ‘No bad days,'” Cook told the Tennessean in 2019. “They write me letters and notes and emails and they sign ‘No bad days’. I know the support is there. They join me. People I don’t know come up to me and say, ‘How are you feeling?’ You just have to live it daily and take it as it comes. Prayer works. And I know there was a lot of prayer going on.

Cook is survived by Lisa Cook, his wife of 27 years. In lieu of flowers, her family is asking for donations to the Jeff and Lisa Cook Foundation, a nonprofit organization dedicated to raising awareness for Parkinson’s disease.

A life plan celebration to be announced at a later date.